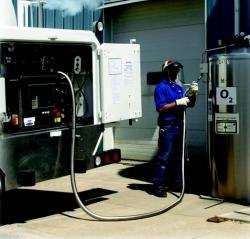 In these tough economic times, you might be driving by new account opportunities every day! With the right knowledge a distributor’s industrial assets can deliver the same molecule to hospitals and other medical accounts for a boost in sales and an expansion of its customer base. Central Medical Gas Supply Systems

Today, the distribution of industrial gases in microbulk form is a standard solution for small-to-medium-sized users looking for a dedicated gas supply in order to abandon the traditional full-for- empty mode supplied by high pressure (HP) and liquid cylinders.

However, distribution of medical gas in microbulk form has not seen a similar trend. When asked, customers with microbulk assets stated they have not added bulk medical gases to their product mix for a number of reasons including the following:

Over the past 18 months the U.S. has seen many manufacturers go out of business while others have drastically cut production. This has effectively reduced industrial gas demand. Distributors with assets not currently involved in medical microbulk deliveries have been forced to take a second look at engaging in this market.

Also, over the past several years, cost effective compliance services have become available from experts like B&R Compliance Associates. Their turnkey compliance programs minimize the internal resources necessary for developing and managing a compliance program.

B&R assisted Chart in preparing a white paper that explains how one delivery unit can accommodate both industrial and medical accounts. A copy of the paper titled, “A Discussion on Regulatory Issues and Requirements Related to Bulk Distribution of Medical Gases,” can be found in the Literature Library section on Charts’ website. 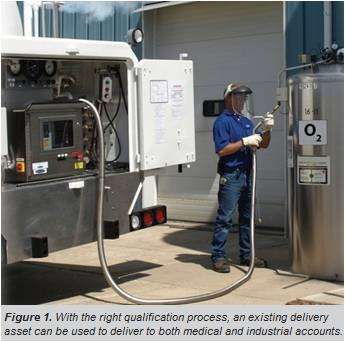 Hospitals used to be the places where U.S. health care happened ―not anymore. We are moving to an increasingly de centralized system with a plethora of new, high-tech procedures, specialized day surgery centers, nursing homes, hospice facilities, and hyperbaric treatment centers. Yet, these all offer potential opportunities for providers of medical microbulk gas supply systems (Figure 1).

There are some limited opportunities in larger hospitals for CO2 and N2O systems, but in smaller settings these are largely served by HP delivery systems due to small volume use and infrequency of use.

Patients in some nursing homes and hospice centers without a centralized medical gas supply system for oxygen are typically administered oxygen via concentrators, E-cylinders or liquid oxygen portables. In facilities where portables are used, these can be refilled by onsite personnel via small 20- to 60-liter tanks which are typically filled by a gas distributor via a smaller van delivery unit (Figure 2). 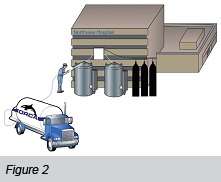 There is an increasing trend in these facilities to refill portables in a room dedicated for this purpose directly from a microbulk tank. That tank can be located outside along the adjacent wall of the room where the transfilling takes place, or inside the room as long as the size of the tank and room requirements are met per applicable code requirements. (It should be noted, per NFPA 99 that you cannot trans fill liquid from any tank that is intended to supply gas to a facility via a centralized medical gas supply system.)

Find these opportunities and learn what is happening in the medical community in your region. For example, are there new healthcare facilities planned or existing facilities planning expansion? Find out which architectural and engineering firms are involved and ask how your company can be placed on any upcoming bid list.

Many A&E firms welcome input from anyone with expertise in systems they are not familiar with such as cryogenic gas delivery systems. They may even specify your company’s equipment and ideas at the design stage ― assuming they meet applicable codes and standards ― these include nursing homes and hospice centers with a need for a comprehensive review of their current oxygen delivery system.

There are also opportunities in older healthcare facilities with systems no longer compliant to current code cycles. Most people assume that these systems are “grandfathered-in” – but one must be careful with that assumption. The 2005 edition of NFPA 99 clearly states that an existing system not in strict compliance with current provisions of the standard shall be permitted to be used as long as the AHJ has determined that such use does not constitute a distinct hazard to life.

The person assigned as the AHJ today may not hold that title next week, and the new person assigned may not accept the same risks as the last. We at Chart have seen more than a few centralized systems that did not even come close to compliance. In one case, a small community hospital’s central oxygen system that served 26 beds, one operating room, one emergency room and one cardiology unit, consisted of a single liquid cylinder and three HP cylinders for emergency reserve. The distribution manifold did not include dual-line regulators or any mechanism for switching automatically to emergency reserve.

Plus, when it came time to swap out liquid cylinders, the system was manually switched over to the emergency reserve during the tank swap so no secondary cylinder was automatically available for backup.  There  were several other notable non- compliance issues, but at the end of the day, the maintenance technician stated they have never  had an issue with the system in 20 years. Most likely, the hospital administrator and the associated risk assessment team members for this hospital did not have a clear understanding of the risks. If a detailed assessment of their systems’ deficiencies were presented to them, they would likely be concerned and motivated to add or upgrade their current setup. 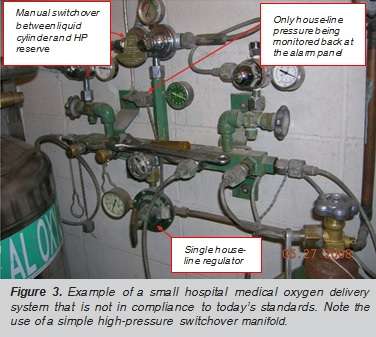 Frankly, a system this “out of compliance” places this hospital’s accreditation ― such as with JCAHO (Joint Commission of Accreditation of Healthcare Organizations) ― at risk (Figure 3). In many instances an upgrade to microbulk might be part of the solution.

For any healthcare facility using centralized supply systems, understanding the classification of these, per NFPA 99, as Level 1, 2, or 3 should be understood for proper equipment selection.

Level 1 systems are those in which the interruption of supply would place patients at imminent risk of morbidity or mortality.

Level 2 systems are those in which interruption of supply would place patients at manageable risk of morbidity or mortality.

Level 3 systems are those that would terminate procedures, but not place patients at risk of morbidity or mortality. Most healthcare facilities fall under level 1 or level 2. Level 3 typically covers clinics, dental and doctors’ offices, or treatment facilities with limited patient care services.

Comparatively, the equipment and installation requirements of a medical gas account tend to be a bit more expensive than a similarly- sized installation of an industrial account. The requirements imposed by NFPA 99 (2005ed), NFPA 55 (now 2010 ed), CGA M-1 and applicable ASSE standards will be reviewed by the local Authority Having Jurisdiction (AHJ). Only that person can sign off on the installation.

That said; if the equipment is part of a lease package, it could be argued there is less risk that a medical gas account would price shop and switch suppliers due to the fact that the installed equipment can be pulled. All-in-all, medical gas accounts tend to be more stable over the long term than industrial accounts. Plus having a healthy mix of both can help a distributor to better weather economic rollercoasters.

For any centralized medical gas delivery system, the equipment that the gas supplier is primarily concerned with rests upstream of the source valve. The requirements for this equipment can be found in Chapter 5 of NFPA 99.

The exception is the hybrid system. A hybrid system is one in which a liquid container is used on the primary side, and HP cylinders on the secondary side. In this arrangement, there are no switching roles between primary and secondary. Microbulk storage and delivery of medical gases is not specifically addressed in NFPA 99 and falls somewhere between liquid cylinders and large bulk storage.

Especially with oxygen, a bulk system is defined as a system with a total capacity connected and in storage of 566,335 L (20,000 ft3) or more at STP and comply with NFPA 55. Even though some microbulk installations fall below this general sizing criteria, Chart believes that because its microbulk vessels are permanently installed and filled onsite, much like bulk tanks, they would be viewed as bulk tanks and would meet the same requirements as bulk tanks.

For example, all of its Perma-Cyl line of microbulk tanks (300 through 3000 liters) can be purchased with a medical gas configuration (option 8) that satisfies the requirements found in NFPA 99.

For a delivery manifold, Chart worked with Tri-Tech Medical Inc., a well-respected manufacturer of medical gas pipeline equipment, to co-develop a manifold that works specifically with its Perma-Cyl tanks. While there are many manifolds available today designed to work with liquid cylinders, none included the features we felt were needed to accommodate a true microbulk application.

Their efforts started with Tri-Tech’s Genesys manifold. Most medical gas manifolds (other than bulk) employ programmable electronics to monitor pressures on the house-line, the primary and secondary headers, and the reserve header.

The information is used to automatically control which header is used and to send applicable alarm signals to the master alarm panel.  Some manifolds can even be configured “on the fly” to accommodate liquid-by-liquid, HP-by-HP or liquid-by-HP with the push of a button and some relief valve changes on the main headers.

There are a few other requirements imposed on these manifolds found in Chapter 5 of NFPA 99 – like needing to economize gas on the secondary side (in liquid applications) while the primary side is in use.

Each manufacturer addresses these issues either mechanically or with additional logic sequences written into their programs. However, all manifolds may not reflect a true liquid level reading. Switching between primary and secondary side is largely based on pressure. 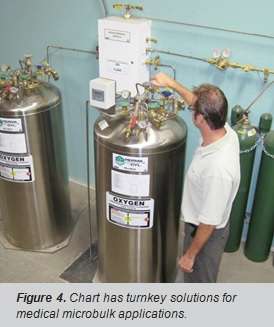 If a driver pulls up to a site and the tanks contents register as empty, the question becomes: “How long has it been empty?”  Many distributors will consider this a “warm fill” scenario which requires following additional procedures before filling. This adds additional time and, in some cases, extra personnel for a fill ― that ultimately costs money.

One of the primary features Chart adds to the Perma-Cyl line of the Genesys manifold is the ability to power the Cyl-Tel liquid level gauge from the panel and return the signal back so that liquid level information is integrated into the operating parameters.

This means the panel can switch to a secondary mode at a pre-set liquid level parameter (typically 15%) for the purposes of maintaining some liquid in the tank for the next fill.  Several other key features were added to the logic sequence. An additional economizing feature will manage pressure in the primary tank when it is offline. There is a blind changeover feature that will manage the contents of the primary tank in the event it switches to secondary early on a pressure event in lieu of liquid level. And, there is temperature protection that can identify if cold gas or liquid has been drawn into the manifold – possibly due to some breach in the gas piping – and automatically switch to an appropriate backup.

Lastly, Chart has received California OSHPD (Office of Statewide Health Planning and Development) Anchorage Pre-Approvals (OPA numbers) on its Perma-Cyl line of tanks. These pre-approvals have become a way of expediting the permitting and installation processes of equipment installed in healthcare facilities in California.

Where traditional large bulk solutions don’t fit for smaller healthcare facilities, choosing a medical microbulk solution can offer the same convenience and safety benefits enjoyed in many industrial microbulk applications. Dedicated equipment removes the safety concerns found with “swapping” containers. It also means that since the molecule path between the air separation plant and the Perma-Cyl is typically shorter with relation to the ORCA delivery vehicle, contamination concerns are minimized.

Potential medical gas customers need to be aware of the benefits of microbulk. For gas suppliers, this is the right time to consider adding medical microbulk to their product mix. 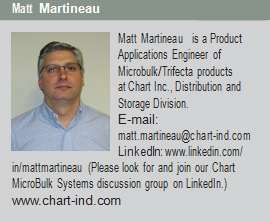